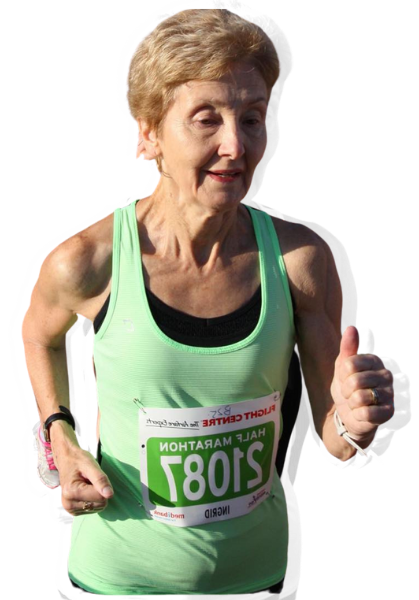 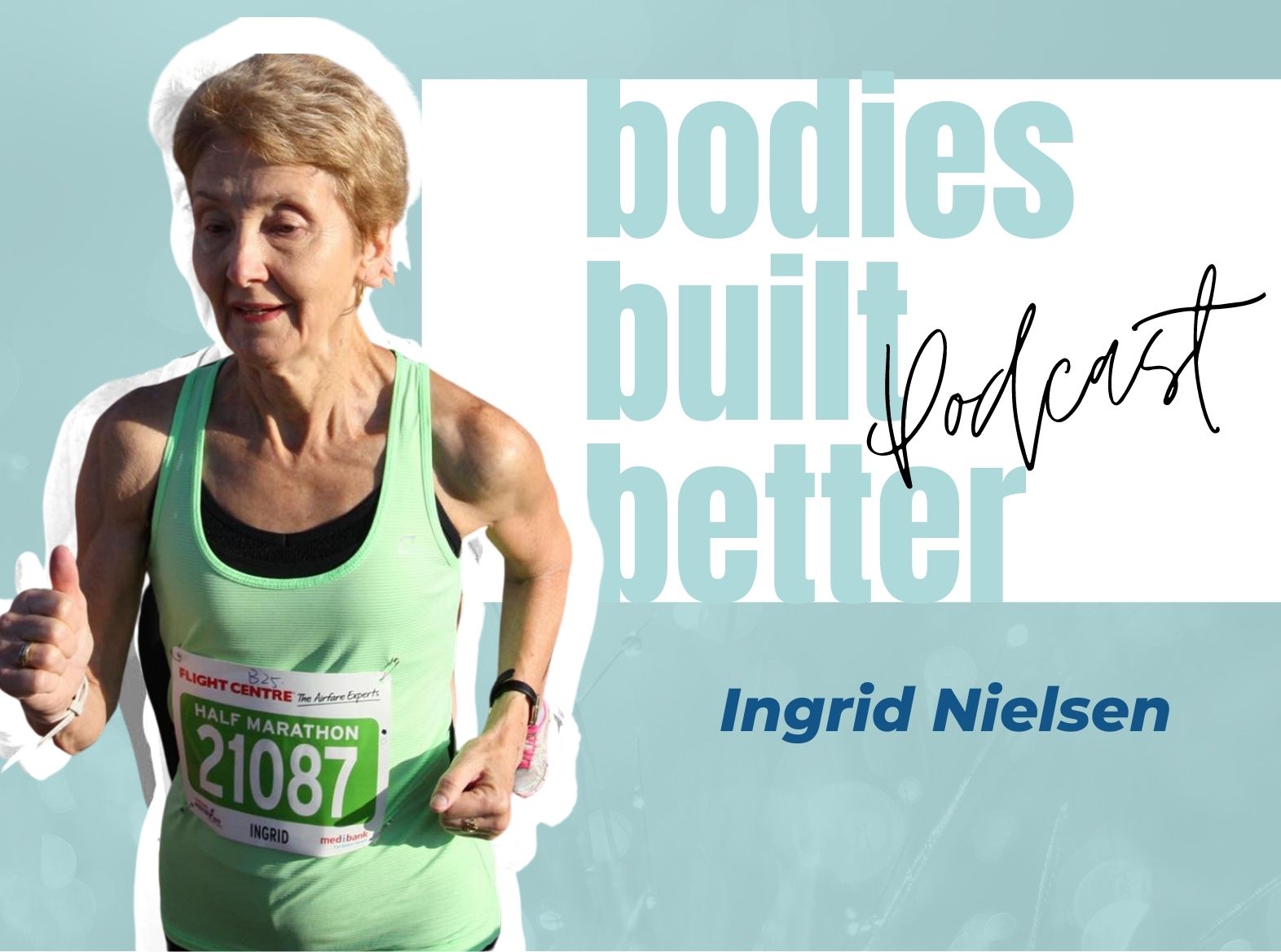 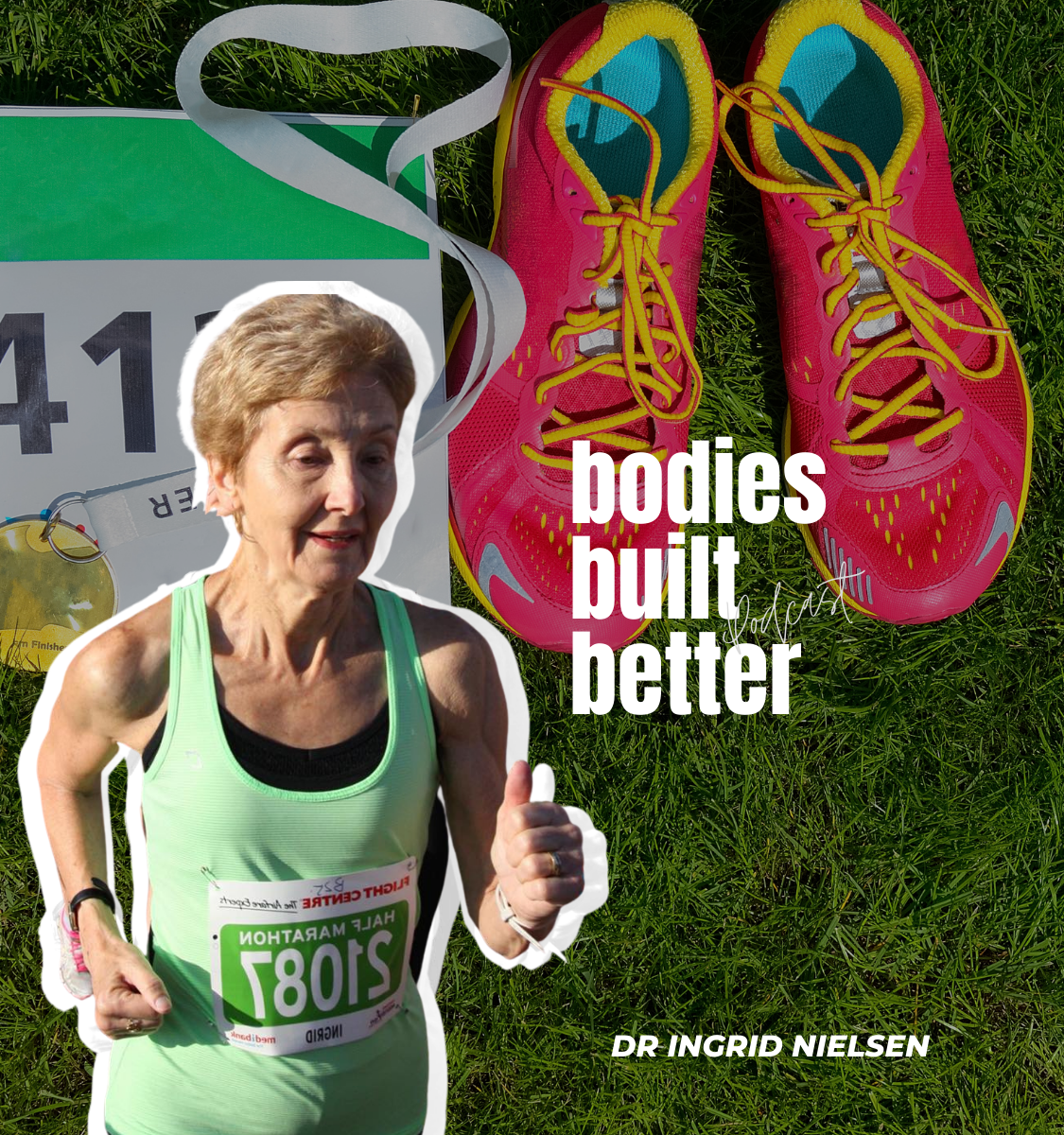 At 73, Ingrid Nielsen is in the fittest and strongest shape of her life. When you hear her talk about her training, you’d be forgiven to think she’s been training her whole life, but Ingrid only started running at 67, ran a half marathon 6 months later and 2 years after that, at 68, she ran her first marathon.

If that weren’t impressive enough already, Ingrid has the most incredible life story, having grown up in Cape Town and Johannesburg, South Africa, Was a nun from the ages of 16-21, studied medicine, married an actor, divorced said actor 3 kids later, became a forensic pathologist, emigrated to Australia , became a Psychiatrist and opened a private practice at 45 to which she burnt herself out at 55.

She took a year off, went back to practice and slowly started to realise the life she was living wasn’t sustainable…..

If you think you’re too old to start a new life, you’re not.

If you’re think you’re too old to start exercising, you’re not.

If you think you can’t, you can….. and Ingrid is the perfect example.

Jackie 00:46
Today on the show, I chat with psychiatrist, half marathon runner, and health and fitness advocate, Dr. Ingrid Nilsen. I’m so lucky to know Ingrid on a personal level, she has the most incredible story. Born in South Africa. She became a nun at 16 years of age. Five years later, quit being a nun. I don’t know if that’s the correct term, but she left nonetheless. She went on to study medicine, married an actor, divorced, said actor three kids later became a forensic pathologist. Eventually a psychiatrist moved to Australia. And if you were to see her face to face, no doubt, your first impression would be that of a lovely, sweet, old lady. Now, I know she would hate hearing me say that word old. Because at 73 She is still running half marathons. She trains several times a week, and is passionate about helping others understand that health and fitness is even more important in the later years of life. In fact, it’s necessary for an incredible woman to get ready to be inspired with Dr. Ingrid Nilsen. Ingrid, thank you so much for joining me today. We’ve known each other for a few years now. And you first came to me? Well, for some body maintenance, because you were doing a lot of training for a half marathon. And since then, we’ve got to know each other. And I think you’d have the most incredible story even if you don’t think so? I do. So can you give us a bit of background on you? right from the very beginning? Yeah.

Ingrid 02:41
Thank you, Jackie, for asking me. And yes, we’ve had a great relationship over the years who have kept this old body. reasonable, Nick, I think over the years, we’ve known each other, um, yeah, from the beginning, or at the beginning 73 years ago. That’s how old I am now. And just to summarize, born in South Africa, one of three siblings, parents, my mother had actually been orphaned at the age of three. And so she was brought up in a Catholic orphanage, this might become relevant later. And so I think she had all the understandable limitations of a child brought up without much emotional support and touching and affection and that sort of thing. And my father was a great provider in terms of finances and so on. But he was a pretty hard old bloke with a very strong emphasis on work, huge emphasis on Work and Income, and less so on other things. Having said that, we had a perfectly adequate childhood. Parents cared for us, and said, there were no dramas there at all. I ended up becoming a rather shy and anxious teenager. Part of this, I think, was great growing up with parents with a background that they had…[Listen to more on the Podcast]

Jackie 06:52
And how did you go from forensic pathology to psychiatry?

Ingrid 06:57
My work with hospice and I love talking to people. So this little shy, quiet, introverted, 16 year old had become somebody who really liked talking to people. And you get people at their most draw, and their most honest, when their life is very limited. And I really enjoyed those encounters. And I think this took me generally in the direction of studying the QRP. So I walked away from forensic pathology, and then did my training as a psychiatrist, still in school in South Africa. At that time. I made the move, I and my three then quite young children made the move to Australia in 91. And I can talk to you about why that happened. And family issues if you’d like.

Jackie 07:50
Oh, yes, because this is even more fascinating.

Ingrid 07:55
These do. All right. So I’m married, a very well known not well known in Australia, but very well known in South Africa, actor and film director. When I was 30. He had been married twice before. And yes, I can see the smiles, you know, didn’t you think about that? Didn’t you ask why. But at that stage, remembering my history I had been in the convent for five years, I had come out. And that’s been seven years studying when it was really head down and Bama up and did nothing else. And then I met this guy, and you know, the rest is history. Anyway, we married and had three children within quite a short space of time. And when the children were one, two and four, he decided he preferred somebody else. So he left me with his three children, and has subsequently gone on to wife number four, five and six. He had no contact with his children. And sadly for him, he’s now deceased. He died last year…[listen to more on the podcast]

Ingrid 13:03
Okay, so it’s, I guess, to the point where Yeah, you came to Adelaide? Yep. And started your private practice. Yeah, I was in private practice in Adelaide, in Chicago as a private psychiatrist for 20 years. So. And clearly, I saw a certain sort of subgroup of patients as you’re doing private practice that was a hard time in a different sort of way. I work really hard. I still had three children to educate and support. So it was hard. I worked hard. I think I work too hard. My hours were too long. And I think I told myself the story that that’s the way it had to be. Again, with the wisdom of hindsight, I think it didn’t really have to be that way. I could have done things a little bit differently and stepped back a little and took better care of myself possibly. During that 20 year period, about probably about halfway through. And I was finding it really difficult. I was still practicing, I believe. But as when people get depressed, I think it just becomes harder and harder and harder to do things. And a lot of people I’m sure will relate to this, that when things get tough. We tend to let up personal things go and sometimes we let our family relationships go. But work tends to be the thing that we hold on to the longest. And so it was on one occasion, I can still remember the date it was the eighth of October 2003…