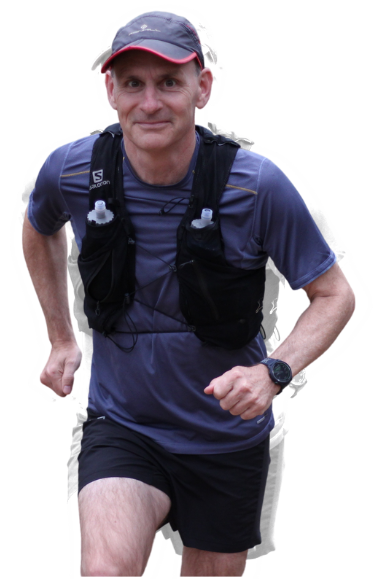 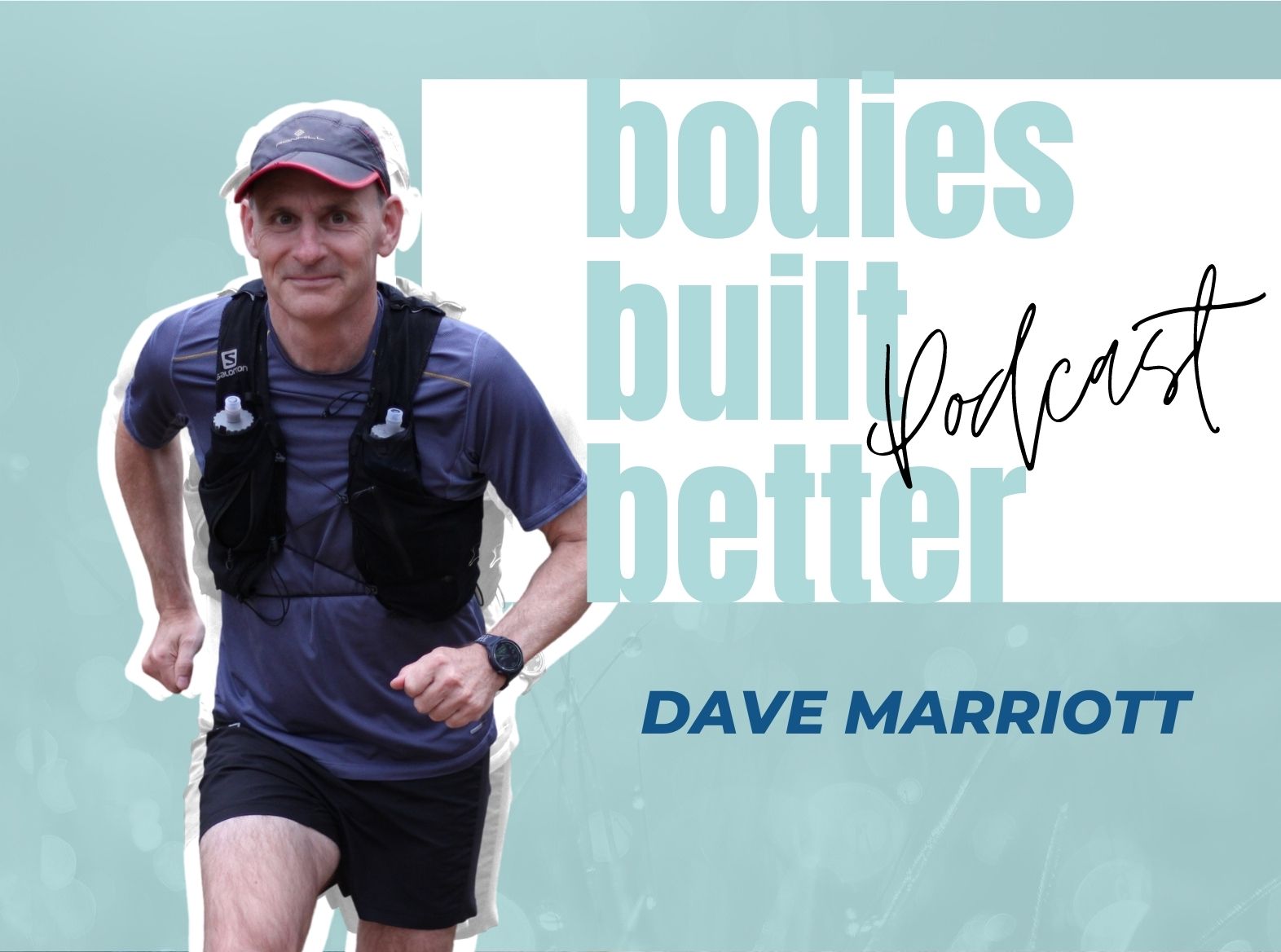 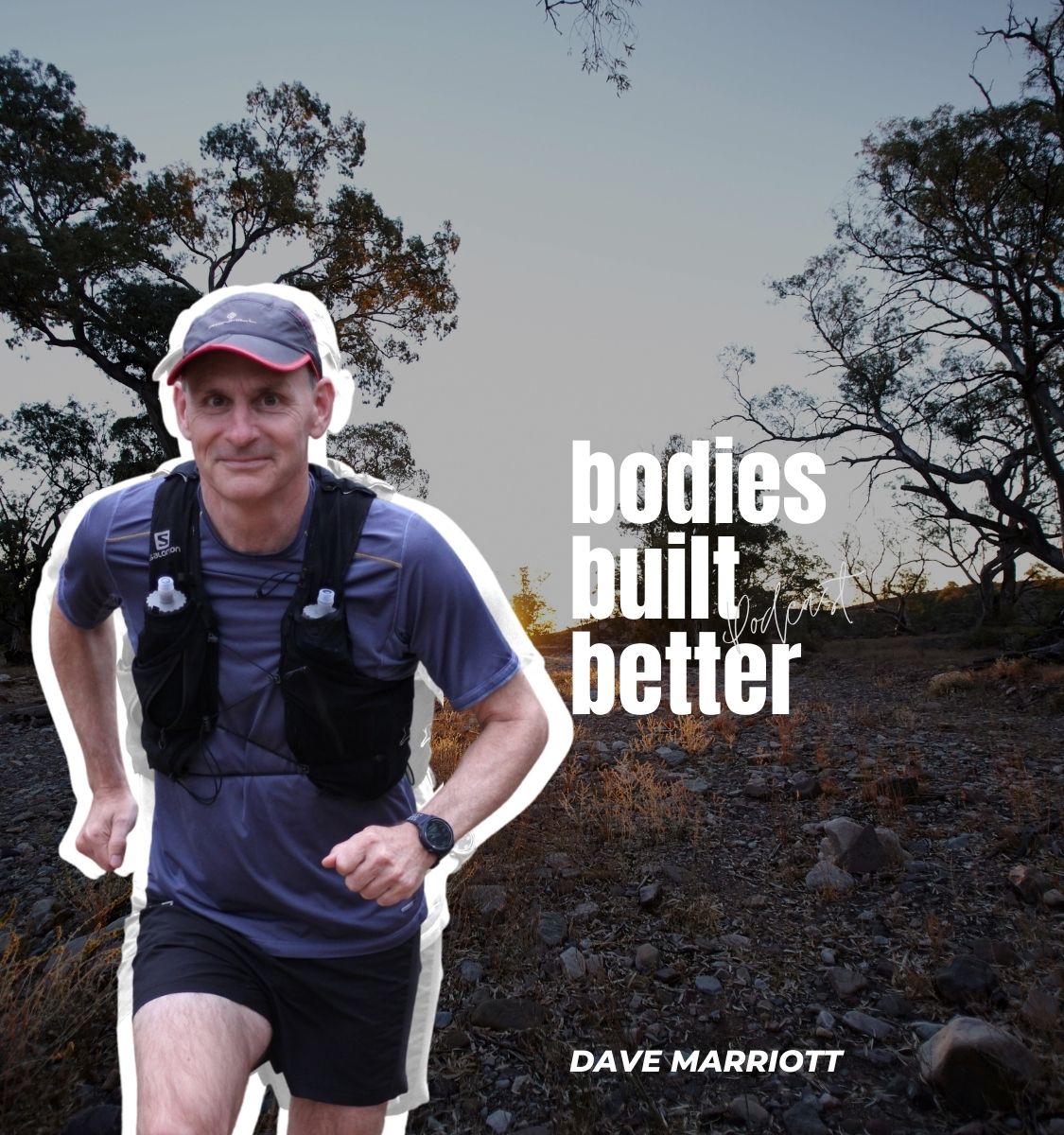 Dave Marriott, an easy going and quietly spoken man of few words. Unless you’re talking about running that is. In April this year, Dave completed the Hubert 100 mile, which for all the Aussies, is 160km. Dave tells his story of how one day in his 40s, he didn’t look like that fit guy he thought he was, so took up running.

Needless to say, it’s something he’s very good at. Running 100km events is now the new norm. There is no secret method or special race plane he follows. He keeps it simple and thinks you should too.

Jackie 0:11
Hey, this is Jackie Tann and welcome to the body’s built better podcast. On the show we chat with experts, athletes, coaches and authors to educate and inspire you. We explore the body’s incredible ability to heal, adapt, and evolve so you could crush limitations, reconnect your body and mind and discover your extraordinary potential.

Getting To Know Dave Marriott

Jackie 0:45
Today on the show, I chatted with ultra runner, Dave Marriott in 2020. Dave rented for 100 kilometre events with two of them only a week apart. This year, he signed up for the Hubert 100 mile, which for all of you wondering how many kilometres that is, it’s 160 kilometres. Dave is an inspiration and proof, you can start running in your 40s and conquer anything you set your mind to. We talk about the prep leading up to the 100 mile, how he managed his nutrition and how he managed to run straight through the night. An awesome chat with a humble man, enjoy this episode with Dave Marriott. Dave, thank you so much for chatting with me today. I’m super intrigued about this conversation, because recently, you ran a very long way. And I guess I would like to understand why someone would run such a distance, but also all the logistics behind that. But before we get into that, I think it’s really important for people to get a bit of background on you to give them a bit of perspective of what it takes to run something like this and the commitment and discipline behind it as well. So, you know, what do you do for a living? And what does your average day look like?

Dave 2:23
Sure, oh, it’s great to be with you. So, yeah, what I do for a living or when I’m not running during the day, I’m an accountant. So I run my own business. I’ve got one other partner, we mainly do work for big corporations and government departments. So that keeps me reasonably busy. When I’m not running. I’m married with three grown up children. One of them actually lives in Melbourne at the moment, which is proving to be a bit challenging lockdown again. Yeah, with the current lockdown. So we’re hanging out to get over there as soon as we can. So I also do some volunteer work for a dog training school here in Adelaide. Yeah, Yes, I do. So that’s called canine behavioural school. So yes, I do a bit of the website stuff for them. And also registrations. I used to be the president of the club. And then I was head trainer for a short time. But these days, I just do behind the scenes stuff.

Jackie 3:37
Yeah, right. This sounds like it takes quite a bit of your time. reasonable amount. Yeah. Running

How Dave Got Started With Running

Jackie 3:57
All right. Well, I know you’re, you’ve been running for a little while, before we get into that big event. Can you tell us when you actually start running?

Dave 4:09
So it’s actually almost 10 years ago, to this day. So yeah, we’re sort of in my mid 40s. And, you know, three kids running my own business. So I probably wasn’t in the best shape that I probably could have been. Actually, you know, one of those sort of watershed moments, I think, was when I was actually looking at some photos of myself that I had recently taken. And it kind of dawned on me that I didn’t really have the smoking hot body that I thought I had. And, and yeah, so I just decided that, you know, maybe I should get a little bit fit. So what I did was I started doing the couch to 5k programme. So for those people who don’t know what they do, it’s like an internet based thing. But basically, it’s designed to be able to take you from doing nothing sitting on a couch, which is pretty much what I was doing to be at around 5k. And I think I’m not exactly sure what the time period is like a Barbie 10 or 12 weeks or something like that. And so it’s just, it’s almost like an interval based thing. So you know, on day one, you go out, you walk five for five minutes, you jog for 30 seconds, walk for two minutes, jog for 30 seconds, and then those intervals just slowly sort of change over. So by the end of it, you can run five K’s. So my plan was just to be able to get to five K’s. And that was all I wanted to do. I just wanted to be able to run five K’s. And not not really know. I mean, I partially did some of it with my dog because I live in the foothills in Adelaide. And so there’s quite a lot of walking trails around where I live. So I took her with me for the first few weeks, but she really only turned out to be good and good enough for about 1k of running. And then the whole sniffing thing sort of took over. So she had a very short running career. But no, actually, I cannot remember. But I would have done it in the timeframe that the programme sort of specified. But no, I don’t see wasn’t a huge moment for me because he I don’t really

Jackie 6:34
know about the first running events cuz obviously you kept going. You this was your thing.

A Growing Career In Running Marathons

Dave 6:43
Yeah, that’s right. So no, I think I started in around August or so. I think it was 2011. And then the first event that I registered for was the sales training Road Runners club sack. Had an event towards the end of the year. It was called the Glendale classic. I think they still have it now. But it was a hit two distances, five and 10 Ks. And it was damn Glenelg in Adelaide sort of along the Esplanade or one of those tracks along the beach. And so I thought I’ll just register for that. And I remember turning up to it and looking at all these really fit people and thinking, Oh my God, this, I felt really intimidated by the whole thing. And I was really nervous, incredibly nervous, because I just had no idea what to expect, because I’m pretty sure I hadn’t actually ran five K’s that many times at that stage. No, it may have only been two or three. But anyway, I did it. And I finished. And I feel pretty good towards the end. But I can tell you it was the toughest event I’ve ever done. It was such hard work. Yeah. Really hard work. Yeah, I was. I mean, I wasn’t particularly that fit. And I hadn’t really run five K’s many times. So you know, by the end of the night it is completely cooked. I was out of breath, just managed to stagger across the finish line. But I think I did it in about 25 minutes. So I wasn’t

Dave 8:24
Yeah, like I was pretty pleased with it. But you know, really,

Jackie 8:27
I wouldn’t be pleased with that now.

Dave 8:32
But, you know, I had no idea about running at all, let’s face it, even the shoes, I subsequently found out that I had completely the wrong type of shoes. Now I had cross training shoes that were five years old that you know, pretty much falling to bits. So you’re looking out at the front. Pretty much that was the year. So yeah, it was pretty raw. But that was great. And that was really the thing that got me on the whole thing. But you know, at that stage, I had no plans to run further than five K’s at all.

What Changed Dave’s Mind About Running

Dave 9:15
I was probably thinking about both Really? I thought I really just wanted to improve my 5k time. No, that was I just thought I’m pretty sure I could run faster than 25 minutes. And at that stage as well, that was the last event on the calendar for the year. So there weren’t any events for quite a while. So I think the next one probably wasn’t until March of the following year. So I didn’t really do any more events because there was nothing like parkrun in those days. So there you know these days, there are so many running events you can run every weekend and event Adelaide these days. Whereas back then there wasn’t a lot going on. So I think then the It’s a bit hard to remember really, but I must have just kept running and just, you know, doing a lot of 5k runs. So then the following year, which was 2012, I pretty much just trying to remember I think, for the first six months of the year, I just did South Australia in running Road Runners club 5k events, and managed to get my time down, I think, you know, probably not two or three minutes of my time in the next six months. So yeah, I was pretty happy with the way things were going. So then after that, I think that year, I went to the city to surf in Sydney. So I’d never run, I think I’d run seven K’s in training. And I decided to go to the city to surf, which is PMS from at least 14 Kansas City to surf. It’s been a while since I’ve done a 12 or 14 case anyway, I’d never run that far.

Where To Find Dave Marriott 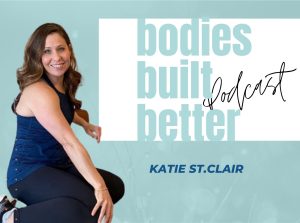